The benefits of urban intensification

The Housing Supply Act (see Novembers post on the '3x3' Bill) has a cost-benefit study (note 1)  that helps to justify the changes to the RMA set out in the Act. These changes enable intensification through the medium density residential standards - or MDRS. The standards permit 3 dwellings on all residentially zoned sites, subject to meeting the standards. 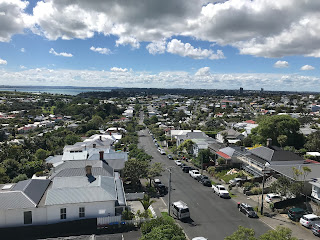 Benefits of applying the MDRS are seen as:

These benefits compare with costs of $3.250B. These 'costs' include reduced infrastructure costs from more urban intensification compared to greenfields growth (a saving of $237m - something to be looked at in another post)

So a clear winner.

The stand out benefit is agglomeration (consumer surplus relates to reduced house prices - or at least house prices that do not go up so fast).

The report is very opaque as to how it has calculated the agglomeration benefit. It is hard to marry up the figures in Table 16 with those in Table 2.

So how do you get such a massive benefit from 75,000 more dwellings across 6 cities?

First up, the following additional dwellings are assumed to be generated by the new MDRS rules, in  the medium term, over and above the status quo.

Whether this level of additional growth eventuates is hard to judge, especially at the moment with international migration slowed and Auckland actually losing population. But perhaps possible, once we are free of the pandemic and things get back to ‘normal’.

The report notes that the extra supply of housing enabled by the Act, if the growth materialises, might be occupied by:

It is not clear which scenario is used to calculate the agglomeration benefits, but a good place to start would be a combination of the first and second scenarios. Lets assume existing residents who form new households occupy half the new dwellings, while the other half of the new dwellings get occupied by ‘new residents’ attracted by the (somewhat) less expensive housing from elsewhere. To make it simple let's assume that the new residents are all sourced from within  NZ.

For Auckland, this means as a rough guess that of the 39,000 additional dwellings over the medium term ( next 10 years), 19,600 dwellings will house - say - 58,800 new residents (over and above the without housing Act scenario).

How does this change translate into increased productivity and hence regional economic growth of about $2.5B?

Agglomeration benefits arise from the capacity of dense concentrations of workers to enable ‘economies of sharing, matching, and learning’ (or knowledge spill overs and dense labour markets). In New Zealand, it is stated that doubling the number of jobs within commuting distance of a person’s home is associated with a 6.5 percent increase in that person’s productivity.

It is noted that Auckland may have a higher elasticity - at around 0.0768 - than the national average. But it may also be lower, at 0.056.  The higher figure is from the cost benefit analysis for the NPS-UD. That analysis apparently used elasticity rates based on a 2009 report (that also had the lower figures in it - see Note 2).

But what about the regions that lost people to Auckland, would their productivity go down a notch?

The 2009 report noted that the high density regions of Canterbury (elasticity of 0.048), Wellington (0.063) and Auckland (0.056) have lower agglomeration elasticities than less dense regions, consistent with decreasing returns to agglomeration.

And can it be assumed that the extra dwellings will increase urban density? The new houses may be located on the edge of the region, in a low density format. Alternatively, they may be located in central areas. The cost-benefit study seems to assume the latter.

But based on Stats NZ definitions of urban areas (combining the relevant main, large and medium urban areas in Auckland, Wellington and Canterbury regions), Auckland's gross population density hasn't gone up much since 2018. 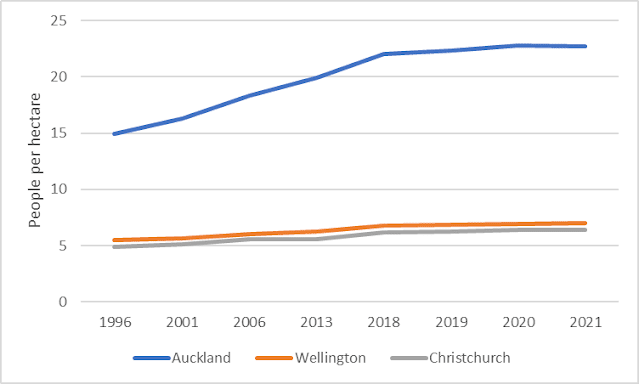 The flattening of Auckland's density curve over the last few years is a bit hard to understand. The land area that the calculation is based on is Stats NZ's 2018 definitions of urban areas, which remains constant over the time periods. The flatter curve looks like it is a result of more growth in lower density areas (eg small urban areas on he edge of the main metro area), and a small loss of population within the main metro area.  The Housing Supply Act / MDRS may turn around this trend, or it may exacerabte it.

Whether urban productivity is increased by proximity these days is a bit of a moot point. With the growth of remote working spurred on by the pandemic and the loss of populations in large cities, it may be that productivity is now powered by virtual connectivity, rather than physical proximity.

As we don't know what settlement or employment patterns will result from the additional capacity enabled by the new rules, we need to look elsewhere for data on agglomeration benefits.

If we account for inflation over that period (based on the Reserve Bank’s inflation calculator) and reset the 2000 GDP figure into todays dollars, then GDP per capita grows slightly slower than population growth - a 39% increase as compared to a 43% increase in population.

For the rest of NZ, growth in GDP per capita has exceeded population growth.

While GDP per capita is growing faster elsewhere than Auckland, Auckland’s per capita GDP is still quite a bit bigger than elsewhere. So transferring a household from out of Auckland into Auckland should lead to increased GDP, even if new (additional) agglomeration benefits are not present.

So what happens to other cities under the 'with' extra population scenario?

If we zero in on Wellington and Christchurch as being the two likely donors of new households shifting to Auckland, then we start with the following ‘baseline’. data.

If we increase Auckland’s population by 20,000 households but reduce Wellington’s and Christchurch’s growth by a similar amount then we get the following ‘with’ and ‘without’ figures.

The without scenario does not involve 20,000 households shifting to Auckland. The ‘with’ scenario involves the extra 20,000 dwellings being built and occupied in Auckland, and Wellington  and Christchurch growing slower than they otherwise might be the case (the without scenario). That is, there is a net loss of households to Auckland, even with the extra dwellings enabled by the new policies.

However counterbalancing that increase is a smaller increase in Wellington and Christchurch under the with scenario, compared to the without scenario.

The net agglomeration benefit for the country of the 'with' scenario is $1.303B.

There may be a small increase in GDP from the growth of Hamilton and Tauranga.

Seems a bit of a stretch to me.

Are the estimates all a bit too 'elastic'?

David Mead. I am a planner by trade. For more about me, go to Hill Young Cooper Ltd's website.